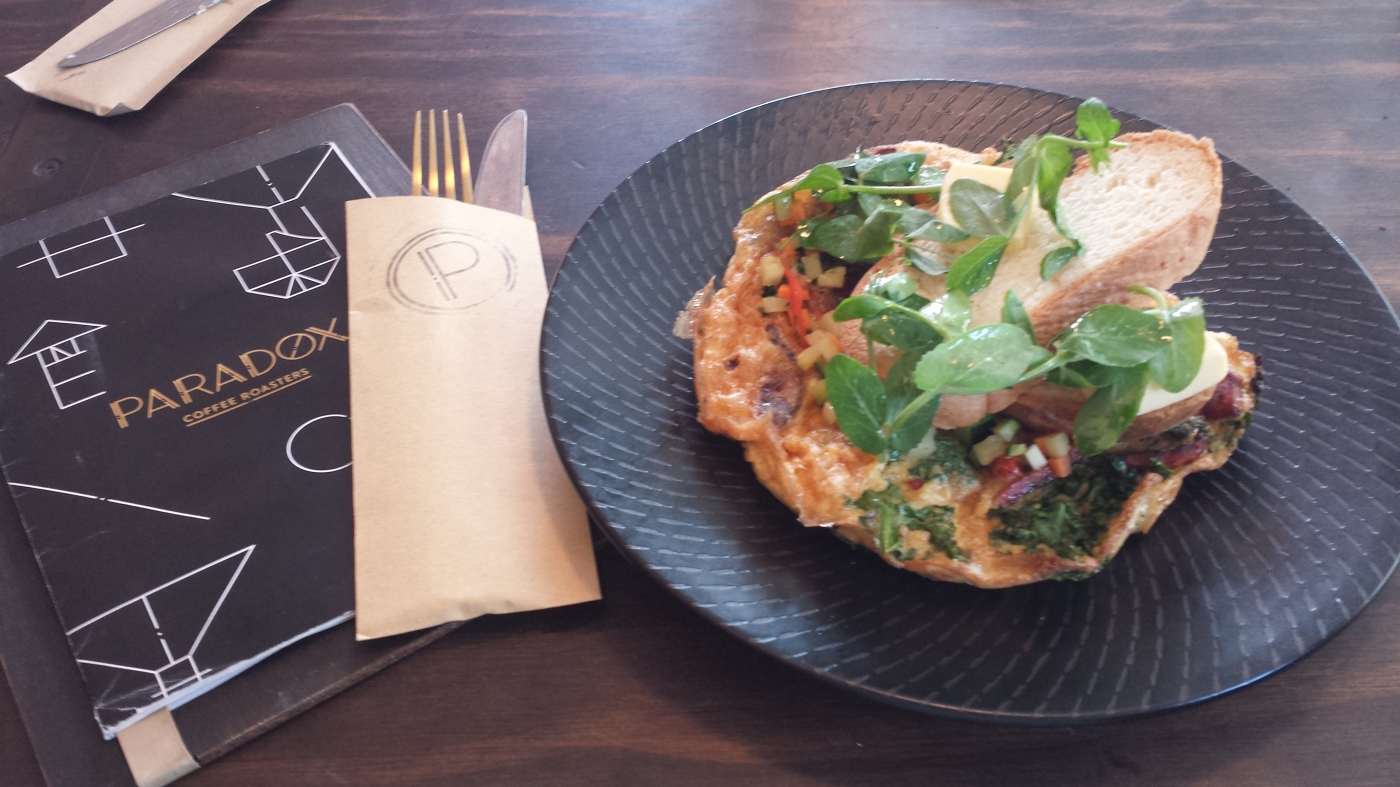 A guy walks into a cafe and orders a takeaway coffee. The girl behind the counter asks if he’d like any sugar and he replies, no. ‘Sweet enough already?’ she quips. ‘No, I want to stay bitter’ he replies.

Ahhhh … weekend breakfast. It is one of the true highlights of my week. Even better when my weekend is a long one, escaped to the Gold Coast, and shared with people I don’t get to see nearly enough.

‘Best coffee on the Coast’, my brother (guy responsible for the opening gag) asserts, and who wouldn’t be up for that? So we made the short trip to Surfers to break our fast at Paradox Coffee Roasters, where indeed they do roast their own.

Clocking Melbas nightclub across the road, I felt a little off-balance for a few moments as I marvelled at the tenacity of this Surfers Paradise icon that’s been rocking it since 1981. Nineteen eighty-one, people!

Walking in to the bright, open space of Paradox we were immediately greeted by a very smiley waitress who ushered us toward a comfy booth. At Paradox, it’s not just coffee that they take seriously. They collaborate with and celebrate local artists and artisans whose creations make a very deliberate contribution to the way patrons experience the cafe. Cups, plates, art and greenery are all acknowledged on the menu. As is the locally sourced free-range produce.

The coffee arrived. The cups have no handle! And I don’t suppose they really need one – it’s served at the perfect drinking temperature so there’s no risk of burning your pinkies. We didn’t ask which beans they were grinding that day, but they weren’t the same ones that inspired the best coffee on the coast call. But it was ok.

Next, onto the food. I was veeeeeeeeeeeery tempted by the OLD SKOOL BUBBLE ‘N’ SQUEAK , with chargrilled Byron Bay bacon, artisan free range pork sausage, roasted tomato and herby hollandaise, but it didn’t have the little gf tag at the end, so instead this glutard went for one of the blackboard additions: chorizo, kale and sweet pepper three-egg omelette. As far as I’m concerned, breakfast must have protein and fibre, so this totally met the brief. The omelette was technically well-made (measured against my own omelette-making prowess, which I reckon to be pretty good), and while tasty, I would have liked a bit more chorizo.

As we were leaving I noticed that they have filtered still and sparkling water available at a nifty-looking help-yourself fountain near the entrance, and wished that I had have known about it earlier.

We walked out blinking into the daylight, as so many Melbas patrons have done before, sated and happy, and ready for the rest of the weekend.