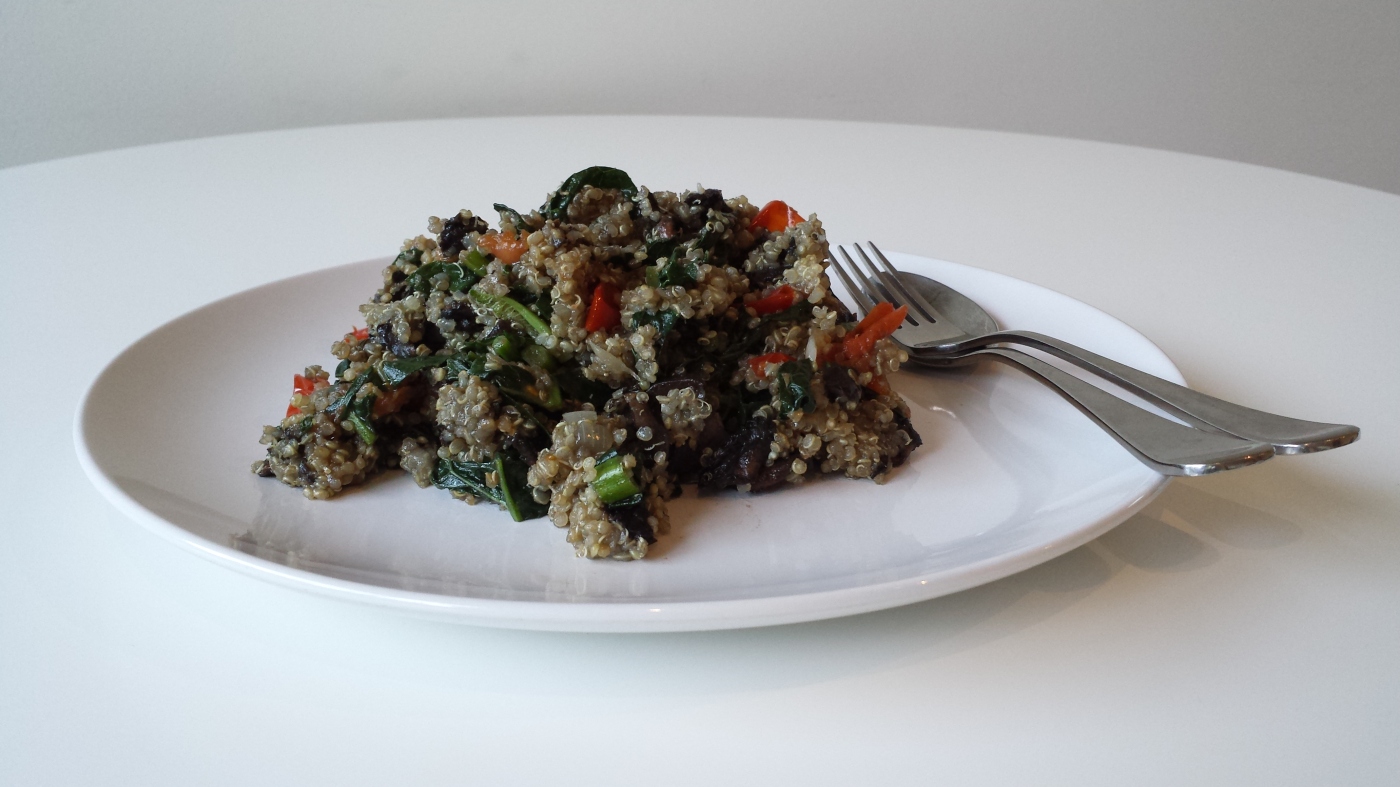 Quinoa, I think, has done well to go from seemingly nowhere, straight to superfood status, totally bypassing the stigma of being hippie food. Other things, like yoga for example, took a long time to evolve from being an activity for new-agers to being an utterly normal – clichéd, even – thing to do.

I’ve been eating quinoa and practising yoga for a number of years, and enjoy both. You have to be careful with quinoa to really give it a very thorough wash before cooking it, or you end up with soapy-tasting food. I always start by putting it into a bowl, covering with water, giving a bit of a stir, carefully draining the water off, and repeat this a few times until the soapy bubbles stop appearing in the water.

I’ve found that there are a few perils associated with yoga, also. One being the stinky feet of a fellow yogi on a mat next to yours. I mean if you’re taking stinky feet to yoga there’s not a whole lot you can do about it, especially  if the class is at the end of the day, but jeez, it can be rough for your neighbour who’s trying to just be focussed on what it is that they’re doing. There you are in your downward dog, and 30cm in front of your nose are a pair of feet emanating a reek like so many wheels of Parmesan cheese. That kind of distraction is tricky to block out!

There is also of course, the occasional bottom burp that escapes, to the utter humiliation of whomever it has sprung from, but these are rare I find. And what is all the omm-ing about? I myself practise yoga for the physical and psychological benefits that I get from it, but the omm-ing (and other various chanting) definitely creates a bit of a hippy vibe. I’m not into it.

As far as the quinoa goes, the issue that I was having with it was that I’d become bored with the few things I was making with it. So I did some Googling for inspiration and came up with this fab-o salad.

Rinse, rinse and rinse the quinoa, then drain it. Finely dice the onion and crush the garlic, then in a large saucepan, sauté the onion and garlic until soft and translucent. Add the drained quinoa to the pan along with the chicken stock. Cover and bring to the boil, then reduce to a simmer until the liquid is absorbed and the quinoa unfurls its little coils.

Meanwhile, shred the kale then steam it until it softens. Heat some of the olive oil in a pan and add the sliced mushrooms and thyme. While the mushrooms are cooking, slice the cherry tomatoes in half. When the mushrooms have released all of their liquid, remove them from the pan, reduce the heat and add the cherry tomatoes with some oil and a good splosh of the balsamic. Turn the tomatoes cut side down, and simmer over a low heat until they start to caramelise.

Transfer everything to a large bowl and mix well.

Serves four as a main dish, or more as a side.

2 thoughts on “Quinoa salad with mushrooms, kale and balsamic tomatoes”